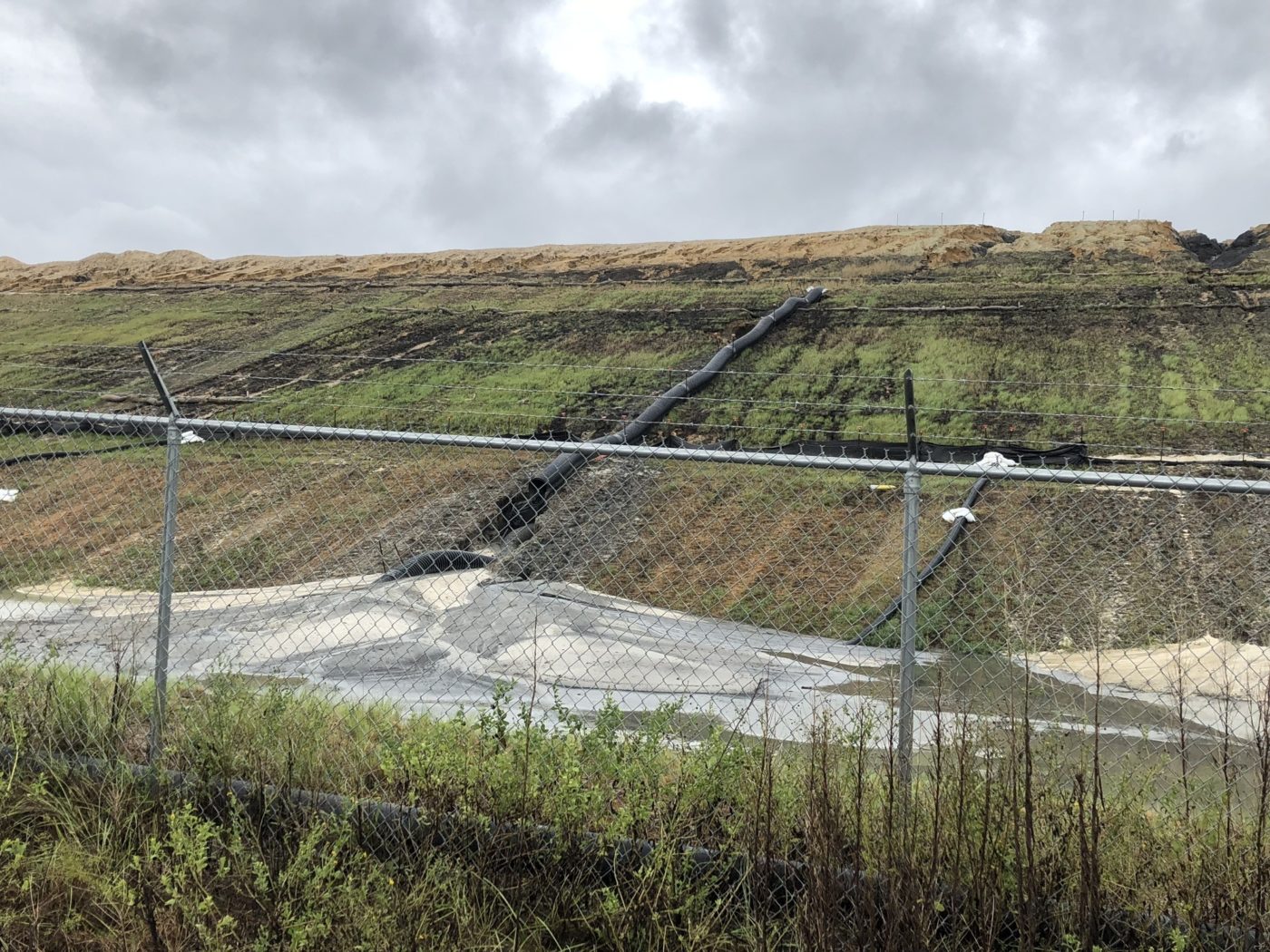 Cape Fear Riverkeeper Kemp Burdette, who is on site at Duke Energy’s Sutton Power Plant investigating breaches at the Sutton coal ash landfill, reports that there are at least two sections of the site with overflows. As of 9:45 a.m., both breaches were “very large,” according to Burdette, and a “waterfall’ actively pouring out.

Mr. Burdette said, “When I saw it at 9:45 am on Sunday morning September 16, the breach was not contained. It appears to be a major ongoing failure of their containment measures.  Every time we get a new band of showers and more rainfall, it will continue discharging. I am extremely concerned that this significant, ongoing discharge will eventually make it to the Cape Fear River just upstream of Wilmington.”

Video of Kemp at the site is here.

Duke Energy reported a release at the plant, which is in Wilmington, NC, around 9 p.m. on Saturday, Sept. 15. The release occurred when Hurricane Florence flood waters washed coal ash from a landfill near Lake Sutton.

Although 2,000 cubic yards of material was displaced—enough to fill 150 dump trucks—Duke Energy officials say they do not believe the spill will have an impact on the environment. However, they could not say if any coal ash washed into Sutton Lake, a popular spot for fishing and boating, or the Cape Fear River.

Coal ash contains high concentrations of toxins and heavy metals, such as arsenic, chromium, and mercury. Historically, Sutton coal ash ponds discharged arsenic, selenium, mercury, antimony, cadmium, chromium, lead, and zinc into Sutton Lake. A 2013 study by U.S. Forest Service Research Fish Biologist Dennis Lemly found that hundreds of thousands of fish in Sutton Lake suffered severe selenium-induced deformities, or had died because of selenium exposure. Duke’s own water- testing data showed there are high levels of groundwater radioactivity at 11 of 18 of its plants. Coal-fired power plants are the number one source of toxic water pollution, by volume, in America.

“Much as Duke Energy might try to spin otherwise, these heavy metals and leaks of radioactive water from their coal ash ponds are a fact,” said Donna Lisenby, global advocacy manager at Waterkeeper Alliance. “Toxic coal ash, radioactivity, and heavy metals shouldn’t be anywhere near the state’s lakes and rivers, nor should they be leaking into North Carolina groundwater and surface water daily,  as they are now, even on days when the rivers are low and the sun is shining.”

Duke Energy pled guilty to criminal violations of the Clean Water Act in May 2015. Since then, Duke has downplayed ongoing problems at its coal-fired power plants in reports to its federal court-appointed monitor, who oversees the company’s compliance with terms of its five-year probation.

Hurricane Matthew previously showed the vulnerability of Duke facilities to severe weather. But even normal rainfalls have led to spills: Duke blamed an October 2017 spill in Cliffside on 3.74 inches of rain. Another release from the Asheville airport structural fill in October 2017 was caused by what Duke called “severe thunderstorms.”

Waterkeeper Alliance reviewed EPA records of historical waste releases from coal ash ponds in North Carolina. Among them: A breach of an internal pond dike at the W.H. Weatherspoon Power Station in 2001; flooding that washed away waste at Cliffside Steam Station in 2005; and a pond breach at the Roxboro Power Station in 2008. On September 28, 2010, a coal ash pond dam failed at Sutton. Employees found the failure when they drove a truck into the breach. Approximately 10 cubic yards of coal ash was released from the breach estimated to be approximately eight feet deep and about 22 feet wide by 100 feet long. Photos of the 2010 breach at Sutton can be found here.

Waterkeeper Alliance and Waterkeeper groups in the Carolinas are documenting the devastating aftermath of Hurricane Florence. Video and images will be available here.

The Waterkeeper Alliance Rapid Response initiative provides trusted and independent information following disasters on our waterways. In a climate of lax federal regulations and budget cuts to state departments of environmental conservation, the need for Waterkeeper Organizations and Waterkeeper Affiliates to speak truth about the devastating impacts of water emergencies on communities has never been greater. Waterkeeper groups will remain involved as long as necessary in order to assure that proper clean-up, mitigation, and enforcement is completed.