Letter from the President, Robert F. Kennedy, Jr.: Horsemen of the Apocalypse - Waterkeeper

Letter from the President, Robert F. Kennedy, Jr.: Horsemen of the Apocalypse 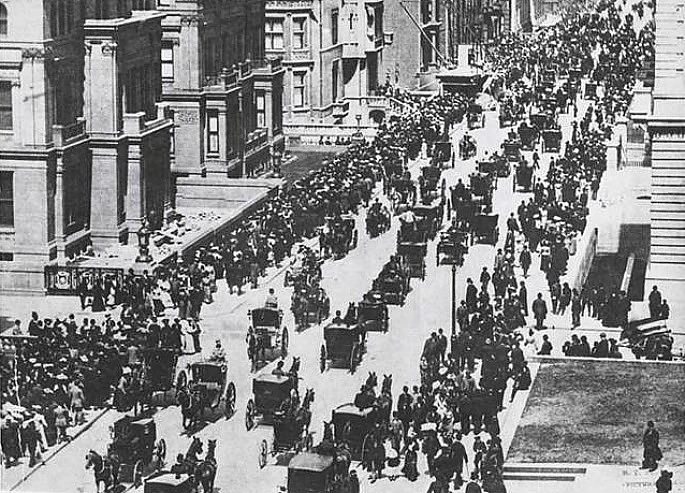 Not long ago, the legendary economist Amory Lovins showed me two photos, taken 10 years apart, of the New York City Easter Parade. A 1903 shot looking north from midtown showed Fifth Avenue crowded with a hundred horse-and-buggies and a solitary automobile. The second, taken in 1913 from a similar vantage on the same street, depicted a traffic-jam of automobiles and a single horse and buggy.

That momentous shift occurred because, over a 13-year period, Henry Ford had dropped the nominal price of the Model-T by 62 percent. Wealthy New Yorkers led the transition, and the remainder of America quickly followed.

Between 1918 and 1929, according to Stanford University lecturer Tony Seba, American car ownership rocketed from eight percent of Americans to 80 percent – because DuPont and General Motors had devised a financial innovation called “car loans,” which soon accounted for three quarters of auto purchases. The buggy manufacturers never saw it coming. 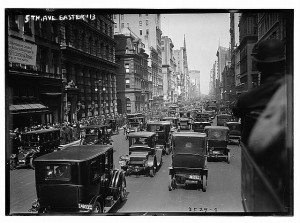 Compare that platform for disruption to marketing in today’s solar industry. Over the past five years, photovoltaic-module prices have dropped 80 percent, and analogous home-solar-financing innovations have spread like wildfire. Three quarters of California’s rooftop solar installations – including the system atop my own home – have been innovatively financed, with no money down. NRG Solar leased me a rooftop array with zero cost to myself and guaranteed a 60 percent drop in my energy bills for 20 years. Who wouldn’t take that deal?

And the costs continue to drop every day. The price of utility-scale solar plants has also plummeted dramatically, to around a billion dollars a gigawatt (compared to three-to-five billion per gigawatt to construct a new coal or gas plant, and six to nine billion for a nuclear plant.) We can make energy by burning prime ribs if we choose to, but any rational utility seeking the cheapest, safest form of energy is going to choose wind or solar. That’s why, according to the Federal Energy Regulatory Commission, in the first eleven months of 2016 renewable energy supplied more than 50 percent of newly installed electrical-generation capacity—surpassing natural gas, nuclear power, coal and oil combined.

Let’s face facts. The carbon incumbents are looking at their own imminent apocalypse. And the real savings for solar and wind comes at the back end — zero fuel costs. Unlimited photons rain down on the earth every day for free. Transitioning to clean fuel only requires that we build the infrastructure to harvest and distribute the photons, and that infrastructure will bless America with a magical promised era of free fuel forever.

The internal-combustion engine is racing toward the same kind of seismic disruption as the horse and buggy. According to calculations by John Walker of the Rocky Mountain Institute, the current operating cost of an electric car is about one-tenth that of an internal-combustion engine. And the range and performance of EVs now exceed those of traditional gasoline-powered cars. That’s why the world’s 15 top auto companies all launched new EV models in 2015.

If you believe in free markets, then the day of the internal combustion engine is over. The markets have already seen the future. The top 50 coal companies are now either in Chapter 11 bankruptcy or on the brink of it. The largest three—Arch, CONSOL and Peabody—have lost 80 percent of their value over the last two years. Observing this landscape, Lovins remarked to me, “The meteor has hit. The dinosaurs are doomed. It’s just that some of them are still walking around causing trouble.”

Amid these rich indices of imminent change, America, prior to the 2016 election, was on the verge of leading the global transformation away from destructive reliance on the filthy, poisonous, addictive, warmongering fuels from hell to a sunny new age of innovation and entrepreneurship, of abundant and dignified jobs, of a democratized energy system and widespread wealth-creation, powered by the clean, green, healthy, wholesome and patriotic fuels from heaven. But the present administration is doing all it can to pull us back from that position.

Renewable energy sources like wind and solar create high-paying jobs, promote small businesses, give us local, resilient power and reduce dependence on foreign carbon fuels. They are good for our economy, our national security and for democracy.

And every American will eventually benefit from the cornucopia of economic, and political and health-giving bounties that will accompany a decarbonized nation. There will be no more poisoned air and water, but instead clean rivers and bountiful oceans, with fish that are safe to eat. No more exploded mountain ranges. No more crippling oil spills in the Gulf of Mexico, or Alaska or Santa Barbara. We will no longer worry about acid rain deforesting our purple mountains majesty and sterilizing our blue lakes. No more fretting about acidified oceans destroying our coral reefs, and causing the collapse of global food chains and fisheries. Ozone- and particulate-pollution won’t sicken and kill millions of our citizens, damage crops and corrode buildings. Tyrannical petro-states will no longer be able to subjugate their peoples and victimize their neighbors. And there will be an end to oil wars.

While this portrait of the future is enticing to most Americans and consistent with the historical idealism of an exemplary nation, it is a fearful nightmare for a certain segment of our population, which is willing to sacrifice the planet and to mount all-out war to prevent the realization of that new world. We are engaged, as Abraham Lincoln declared, “in a great civil war,” a successor to the cataclysm of the 1860s that our country endured to end an archaic and immoral energy-system dependent on enslaved human labor. The entrenched interests who profited from that system were willing to sacrifice our country and more than half-a-million lives to maintain their power and profits.

Now, instead of a slave-holding gentry, the entrenched defenders of the system are the carbon tycoons cited in a book I recently co-wrote with Dick Russell titled Horsemen of the Apocalypse.

These are forces of ignorance and greed that are determined to liquidate the natural riches of our planet for cash. Russell makes no bones about the fact that their moral compass is pointed straight at hell. Like the Horsemen in the Book of Revelation, their actions are propelling humanity toward a dystopian nightmare. Leading the charge are David and Charles Koch, whose industries are a template of “disaster capitalism,” whose corporate headquarters are the command-center of an organized scheme to undermine democracy and impose a corporate kleptocracy that will allow billionaires to profit from mass extinction in our biosphere and the end of civilization.

But in the revolution of renewable energy they will meet their personal apocalypse.

The two photos above, of the New York City Easter Parade, were taken 10 years apart. A 1903 shot looking north from midtown showed Fifth Avenue crowded with a hundred horse and-buggies and a solitary automobile. The second, taken in 1913 from a similar vantage on the same street, depicted a traffic-jam of automobiles and a single horse and buggy. Like the buggy makers of that earlier age, the carbon-based industries of today are looking at their own imminent collapse. Left photo by National Archives and Records Administration, Records of the Bureau of Public Roads. Right photo by The Library of Congress.